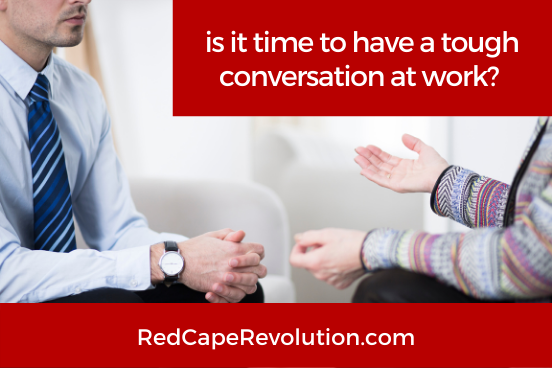 Here’s the fact: we avoid honest, tough conversations at work because we fear the consequences.

We don’t want anyone to be hurt. Insulted. Angry.

(Which is good, by the way, since we need a little more humanity at work.)

But what’s also human is to discover you’re at a place where you need to decide what’s next. Where you know you’re not growing–or not growing in the right direction, or fast enough.

That’s when you need to have tough conversations at work.

It happened to a client of mine recently.

Over the course of a weekend, she completed my Get Career Clear on-demand video class and figured out what she wanted next.

To get there, she knew she needed to have honest but tough conversations at work with not only her boss, but with other leaders in the organization she respected.

But what to say, and how? Here are steps and scripts I created for her –and you–to have the tough conversations at work that’ll move you forward.

Time to Have a Tough Conversation at Work? Here’s the Script (& How to Get Started)

Step 1: Decide to Start Talking (& Start With Your Boss)

For many of us, the first tough conversation we need to have when we’re ready for change is with our direct boss or leader.

Too often, we assume they know the problem. That they’ve seen the signs of our discontent or frustration. That they know we’re unhappy.

And we assume they’re just unable or unwilling to do anything about it.

But let me tell you what’s really going on.

Your boss can’t read your mind.

Just like you, your boss is busy and juggling a million things inside her brain. It’s highly likely she cares about you and wants you to succeed, but she’s not thinking about you every single minute.

Here’s the little workplace tragi-comedy routine I’ve seen play out over and over again:

This little dance is painful for both you and the boss. In the short term, you both lose.

But it’s preventable, if only you’ll start talking. Here’s how.

Step 2: Frame the Ask Ahead of Time

We frame art when it’s valuable, so it can stand out and be clearly visible. Similarly, in a noisy landscape of work, we have to “frame” our requests appropriately, too, so they stand out.

If you’re ready to have a tough conversation at work, you have to frame it ahead of time so that the other person knows it isn’t business as usual.

You can start the ball rolling with a short email:

“Hey [Boss]–would you be open to [having lunch/coffee/sitting down with me for 20 minutes] in the next week or so? I’d like to get your input on a few big decisions I need to make soon, and I’d really value your insights. I’m flexible Tuesday morning and Wednesday afternoon. What might work best for you?”

Your focus is on two things:

Notice you’re not giving a lot of detail, but just enough to signal that this isn’t an everyday conversation.

Now, a smart, people-savvy boss (and I wish those for you always) might read between the lines and say, “Whoa–what’s going on?”

They might even call you, or show up at your workstation.

You can thank them for their follow-up, but say:

“I’d really rather you and I schedule a time to talk in more depth. DATE or DATE look good for me–what might work for you?”

“I’m in the middle of [x project] right now, and I’m sure my note interrupted you doing something, too, so I’d prefer to schedule this conversation on our calendars so we’re not distracted. Does Tuesday at noon work for you?

Keep shifting back to getting the date.

What happens if they don’t schedule it?

My rule of thumb is that it’s the asker (that’s you) is responsible for fierce followup. Don’t assume that just because you sent an email that it was received, and just because it was received it was read.
Script here:
“Hi–just wanted to follow up on my note of [DATE]. I’d like to get time on your calendar to talk about a few big decisions I need to make. I’m open on [DATE] and [DATE], but if those don’t work just reply and let me know what can work for you. Appreciate it!”

If they offer you a date that’s too far in the future, or want to push it to your traditional performance planning or annual review time, just say,

But, if your boss continually procrastinates, waffles, or shoves the request aside, even after three follow-up attempts, you now have specific behavior-based data about your future at the organization.

Don’t get lazy and ignore this step, making excuses that “she’ll never talk to me” or “that won’t work.”

The response to the ask alone is valuable evidence of where you stand when it’s time to change.

So you’ve got the date booked. Take a deep breath and put yourself in a professional, confident, grateful but honest place.

This isn’t a whiny or complaining conversation–it’s two adults speaking with respect.

Thank you so much for taking time to talk to me. I really respect what you’ve done here at [Our Company], and so I thought you’d be a good person to talk to.

As you know, I’ve been leading the charge to [result you create], and I’m really proud of the work I’ve done for our customers and colleagues. I can tell our company’s at a turning point, and I’ve noticed the hard choices we’ve had to make in the business to get to where we are.

Personally, it’s time for me to do the same thing for my career. As I’ve looked hard at my strengths and value, I see a lot of good things for me here. However, I’ve been noticing a huge red flag, and that’s in [the issue that’s concerning you].

My specific concern is that during a time when we need to operate like [X], I see [Y] happening. [Add any specific but brief stories, such as “For example, during the XYZ client crunch, I knew from my experience that we needed to do X, but I was overruled and we ended up doing Y, with Z results.]

The bigger picture here is that I’m seeing red flags in [issue that’s concerning you] and if they continue, I’ll need to make some decisions about whether or not this continues to be the right place for my career.

We’re all so busy, and so I wanted to take this time to make sure I’m being direct with you about it, so you know what I’m seeing and how it’s impacting me. I’m curious if you’re seeing things the same way, and would love your perspective as I think about what’s next.

Then, you shut up.

Let your boss soak it in. Wait for his question, comment, or cue.

Resist the urge to fill in the silence. It’ll force her to speak.

She may ask: “So, are you telling me you’re leaving?”

You can say, “Honestly, I haven’t decided what’s next. Out of respect for you and our company, I wanted to share these concerns first.”

Most likely, she’ll have other questions. Or, even more likely, she’ll want some time to think about what you’ve said, and likely talk to others about it.

Wrap up the conversation (on time is a nice professional touch) with a sincere:

“Thanks for your time and for listening. What are our next steps, and what do you need from me?”

Now you’ve planted seeds. And like any seed, it may take time to grow.

If you and your boss agreed on an action you need to do, then do it pronto. Keep your end of the deal.

If you don’t see anything sprouting from those seeds, follow-up. Again, at least three times is fair.

And, if there’s nothing that happens, then that’s good data that it’s no longer the place for you. You now have data on which to base your decision, rather than just assumption or implication.

Of course, if having the tough conversation at work blows up in your face and you tick someone off, that’s also good data. It’s extremely rare, but it can happen.

If it happens to you, it’s even more evidence that it’s not the place for you. Move on.

But remember–it’s also equally likely that something good may come of your courage to have the tough conversation.

Maybe it will benefit your career, opening doors and ideas that wouldn’t have opened if you hadn’t opened your mouth.

You never know until you’ve tried.

No matter what’s happening in your career, a 30-minute chat with me can show you how to get out of a funk and move forward, fast.

Just hit the button below, and pick a date and time that’s available. There’s nothing to prepare–just show up right where you are. If, after we talk, it sounds like one of my coaching programs or courses will help you going forward, I’ll share details after our call. There’s no pressure—my goal is to be helpful immediately.

Spots fill up fast, though, so schedule yours now and start getting the support you deserve.

How to Say NO at Work: Thirteen Scripts & Strategies (Plus Free Download)

“Help! I Have Too Many Priorities!” What To Do When That Is You