Are you a rule maker–or rule breaker? Here’s a guest post from Helen, one of our readers, who suddenly discovered it was time to stop following the rules and make some of her own.

(Note: I’ve opted to keep her last name private, as I have with some of your other stories in the past. I know your career struggles and hard-won learnings can be a tricky matter and can make both your past and current employers uncomfortable from time to time. While I’m fan of discomfort as a growth strategy, I think the lessons come through without making anyone squirm.)

Don’t Let the Rules Rule You

by Helen, a RedCapeRevolution.com reader

We’ve all heard of “rules to live by” – words of wisdom to guide us through life’s decisions. Often they’re helpful guideposts, but sometimes they are self-imposed obstacles.

Here’s how I let rules influence me, and what I’ve learned from two layoffs and ten months of job searching.

Rule#1 – Good things come to those who wait.

My first career-track position after graduating with a liberal arts degree was perfect, at first. It was the mid-90s and after getting some solid experience in a couple of entry level positions, I secured a great new position.

For several years, my job was ideal. I had an actual mentor who helped me acquire new skills and regularly rewarded my work verbally and with modest pay increases. She retired a few years later, but the culture of the office was a great fit for me, so I settled in and expected things would basically stay the same indefinitely.

I wish I’d realized then how fortunate I was to have a great boss and love my work, rather than taking it for granted. I’d been raised to believe that hard work is always rewarded, so I was convinced that since I played by the rules, I would continue to be recognized and rewarded by doing a great job, being a team player, and being patient.

But after years of management changes and no pay increases once the recession began, I began to quietly look for something better. I resented that the rules had been changed and things I had no control over were forcing me to figure out a new plan for the rest of my career. Morale at work deteriorated once positions were cut and veteran staff members were laid off.

I was told not to worry — that what I did was valued and essential — but a year later it was my turn, and my position was eliminated.

After working in one position for over a decade, I was certain I needed to stay at my next job at least two years, or my career would be ruined. Following a few months of working temporarily as a consultant while I looked for a full-time “permanent” job, I secured a position that I convinced myself was going to be a great new direction for my career.

After years of no raises or cost-of-living increases, the slightly higher salary seemed good, and I was just happy to have a steady 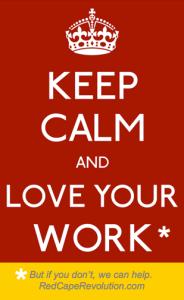 paycheck. Initially, the new environment promised to be an interesting challenge, but within a year things there started to feel weird and unstable and I wanted to leave. I told myself it was due to management restructuring and personality differences – things I couldn’t control.

What I could control was to continue working hard on projects that benefited my employer and gave me solid accomplishments for my resume.

A few months later I started attending professional development meetings, networking lunches, and joined a professional organization. I met people who worked in my field and got validation that I’m really good at what I do. I realized I deserved better than working somewhere I was unhappy and felt unappreciated.

Just when I’d accepted it was time for me to leave, I was abruptly told my position was being eliminated and I was once again looking for what was next.

Time for some new rules!

Although I really needed a paycheck, I decided to collect unemployment instead of panicking and taking the first job I could get. I wanted to figure out what had gone wrong with my last two positions and what I needed to do differently.

As much as I didn’t want to believe it, I’ve finally accepted that life is not fair. Working hard and doing a good job isn’t always enough to earn a pay raise or a promotion. Sometimes other people with less experience or a bad attitude get rewarded, but you don’t. I wasted a lot of time and energy being frustrated about things I had no control over.

[Darcy’s note: if you’re like Helen and are frustrated about things you can’t control, learn what you can control–and what you can’t–in this post.]

With hindsight, I realized I’d ignored signs from my employers that things were changing and it was time to move on. I had put most of my career energy into working hard for them, and very little into my overall career. Being passive about my career had given my employers all the power and caused me to react negatively. I was disappointed that they didn’t seem to appreciate me, resentful that I had to start over, and afraid that I wouldn’t find something better.

Once I took an active role in my career, I felt much more positive and in control. Reformatting and updating my resume, applying for jobs I was excited about, and connecting on LinkedIn were empowering. Attending professional development workshops and meeting people at networking events gave me new ideas about what I could do next and where I could work. I had a few interviews for immediate openings I’d applied for, and got some good feedback in reply to “cold” emails I’d sent to employers who seemed interesting.

While I was hopeful that my recently-cultivated connections would direct me to an exciting new path, I wasn’t convinced a change of direction was right for me after all. While it didn’t directly produce the outcome I was looking for and thought I wanted, my new full-time job networking and job searching taught me a lot.

I was able to narrow down my options and avoid wasting any more time applying for the wrong positions. By talking to lots of people about their experiences, it was like trying on new clothes without having to buy them first. [Darcy’s note: if that sounds intimidating to you, click here to download my free guide “How to Network While You Work” and make it easy.]

In the end, I got the job of my dreams through a casual friend who doesn’t even work in my field! I had told everyone I knew that I was looking for a job. When she told me there was an opening in her office, I was ready with my resume and a cover letter.

Within a month I started working for an employer I’d given up on years ago doing what I do best. I’m appreciated and well-compensated, and can see a real future there.

Sometimes good things do come to those who wait! It’s turned out that my career goals are attainable through my own initiative, not by waiting to be recognized and rewarded by my employers.

YOUR TURN: Which rules are holding you back? Which rules would help you to move on to something better? Tell us in the Comments  below, or share your thoughts on Facebook.